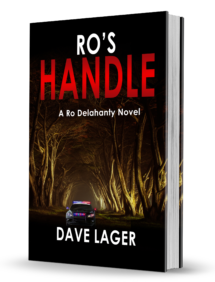 Ten years ago Ro Delahanty announced to her fifth grade schoolmates she wanted to be a cop when she grew up. Unlike most kids, she didn’t change her mind a half-dozen times along the way. Instead, she trained herself for the job by earning a black belt in judo and becoming a champion pistol shooter.

Now a rookie Fort Armstrong County deputy sheriff, she has to contend with being the only female on the force — will she be accepted as an equal?

… with wondering what her “handle” — a nickname deputies informally “award” to fellow deputies — will be, and whether it will be one she can live with.

… and, after two years of self-imposed celibacy, with the unexpected arrival of a “complication” in her personal life.

But her ultimate test comes when four bad guys with assault rifles capture a fellow deputy and, armed only with her Sig Sauer P229 .357, she has to face them single-handed in a shootout.